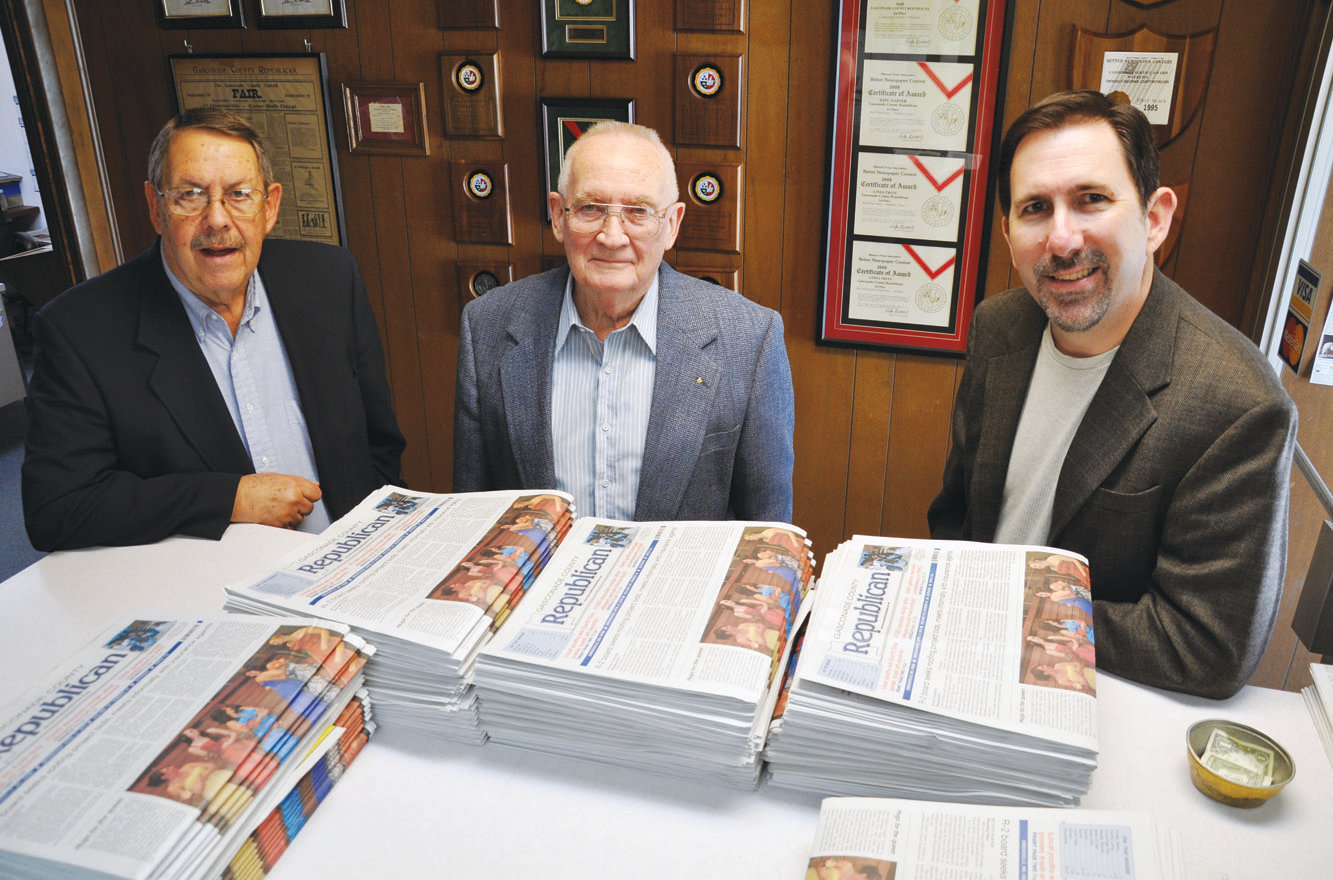 Early historical information on newspapers in the city is sketchy at best and extremely confusing.

Within a nine-year per period — from 1896 to 1905 — Owensville had three newspapers with two in competition for a short time. Seven men — including at time three partnerships from their number — were variously listed as editor, publisher, manager and editor and publisher. Titles, as well as owners, changed rather frequently.

The city's first newspaper, the Owensville Republican, was printed and published here from Oct. 22 1896, to June 3, 1897, by two brothers, F H. and E. G. Isenberg, who also were teachers at Owensville High School. At that time the school was located east of the present-day First Baptist Church and in later years was known as the Old College building.

Citing difficulty in securing newsprint since the railroad had not yet arrived — that would not happen until 1901 — the Isenbergs closed the newspaper and three weeks later reopened it in Hermann, on June 24, 1897, as the Republican Banner.

E.G. Isenberg moved to Hermann as managing editor of the newly named publication; his brother and partner remained in Owensville and contributed local news and editorial matter from the south county area.

It is unclear what happened at this point, but the Isenbergs' direct involvement in the Hermann venture ended on Jan. 13, 1899, when Ransom A. Breuer — later to become circuit judge — was named editor.

The "Republican" part of the newspaper then returned to Owensville on Aug. 31, 1900, and was revived under the same name it had used in Hermann, the Republican Banner, with F. H. Isenberg, who had remained in Owensville when the publication moved to Hermann, returning as editor. Breuer announced his disassociation from the newspaper with the move back to Owensville.

But the newspaper still was encountering difficulties. Apparently it had been closed for a time and then reopened from April 25 to June 27, 1902. It closed down again for six months, this time, before reappearing on Jan. 2, 1903.

The off-again, on-again struggle of the Republican Banner must have encouraged W. O. Boyd, who had moved here from Bloomington, Neb., to publish the first issue of the Owensville Argus, later that same year — on May 8, 1903.

Interestingly, the Argus was listed as a newspaper of "Democratic" persuasion…obviously to counter the "Republican" politics of the Banner.

For over two years Owensville was a two-newspaper town, which — with 1,000 population — just wasn't big enough to sustain both of them.

By September 1904. E. P. Francis and E. P. Gough had acquired the Republican Banner from Isenberg, who became casher at the Citizens Bank. But with the April 21, 1905 issue Gough's name had disappeared from the masthead and Francis became sole owner of the publication…at least for the next few months.

At some point, probably within a year after Boyd launched the Argus in 1903, he acquired a partner, Louis A. Nowack, a native of Chamois in Osage County. Boyd and Nowack were listed as editors in May 1905 and a short time later, by Nov. 10 that same year, Boyd had sold his share of the Argus and its office location to his partner, Nowack, who in the meantime also had purchased the troubled Republican Banner from Francis.

Actually, both publications probably had been struggling to stay alive in the small town and a merger was inevitable.

Listed as its first editor and publisher, Nowack then combined the two newspapers into the Gasconade County Republican, entering the new publication as second-class mail on Nov. 17, 1905…just one week after he ceased publication of both the Republican Banner and the Argus.

Nowack was still publishing the newspaper in early 1907, but by Feb. 27, 1909, Ira W. Meyers was listed as editor and Nowack apparently was no longer with the publication. 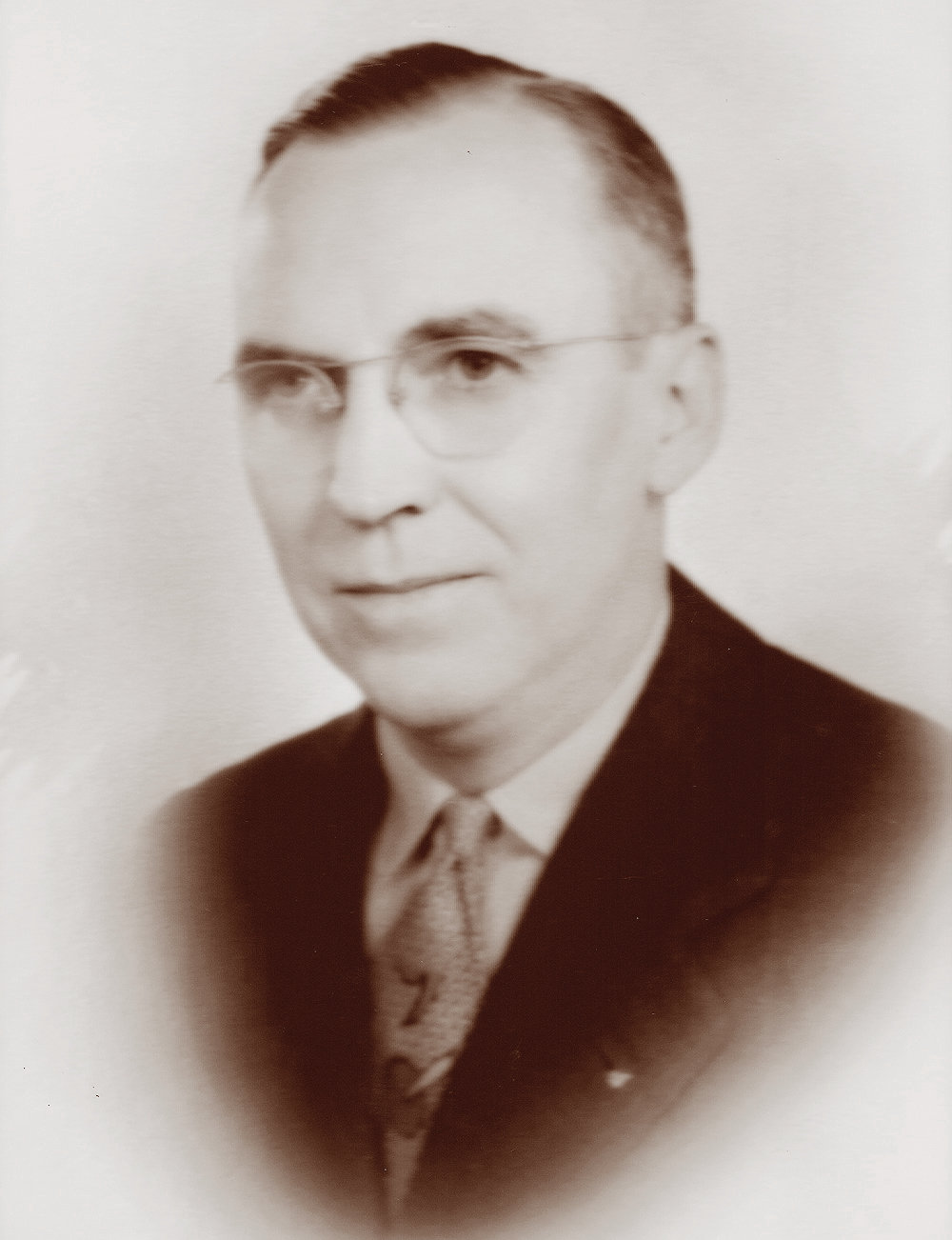 On Jan. 6, 1910, Myers was still editor and Boyd's name reappeared — for the first time since he sold the Argus in 1905 — as manager. By April 22, 1910, Boyd had become sole owner of the Gasconade County Republican and published it until his death in 1933, when his widow became publisher. She leased the newspaper to Ralph E. Warden, who assumed managerial duties, and his sister, Mrs. C. S. Hutton, who became editor.

The newspaper was taken over in early 1940 by Mr. and Mrs. Boyd’s daughter, Blanche and in June 1946 her brother, Charles R. Boyd became editor and published the newspaper until 1949 when the firm of Warden & Murray Publishing Co. purchased it. Ralph Warden and Henry Murray as young men had been employed in the printing office by the Boyd family. In 1963 Murray sold his share in the publication to Ralph and Thelma Warden and their sons, Tom and Don. In 1977 the sons purchased their parents’ shares of the corporation and became sole owners.

In 1987 Dennis Warden, Don’s son started working at the newspaper in advertising sales. Tom Warden retired in 2000. In the summer of 2008 Don Warden also retired, leaving Dennis as the third generation of Wardens to own and publish the Republican.

Over the years several Wardens have worked in the business including Tom’s daughters, Debbie and Diane; Don’s daughter, Denise; and Dennis’  three children, Jacob, Ethan and  Abigail. Jacob has worked at the Republican on a full time basis since May 2012. Jacob has many roles: digital specialist for the Republican; graphic artist; job printing, ad sales, photography and he also covers sports for the Belle/Bland community.

In December 1969 The Republican moved to its present location.

The current version of the newspaper traces its direct lineage back 120 years…back from its 1905 birth via a merger, to the Argus in 1903, the Republican-Banner in 1900 and the Owensville Republican in 1896.

This article written by Tom Warden was first printed in 1997 with research compiled by Bob McKee.

BELLE — Belle aldermen took action on Sept. 21 to dissolve the Maries County Sheriff’s police services contract during a budget workshop that was advertised on Sept. 14 at City Hall and …

Another successful Battle of the Bulls for the Ya Yas

The Ya Yas successfully packed the park Saturday for the annual Battle of the Bulls event. Ya Yas organizer Cindy Bulter (above) takes a fall during a game of musical chairs as fellow Ya Ya Jacy …

BELLE — A 19-year-old Belle woman received serious injuries Sept. 23 in a one-vehicle accident when the 2015 Chevrolet Traverse she was operating traveled off of the left side of the …

BELLE — In a 75-minute meeting on Sept. 23, Maries County Sheriff Chris Heitman agreed to release the city of Belle from its police contract by Dec. 31 — 60 days — pending the Belle …